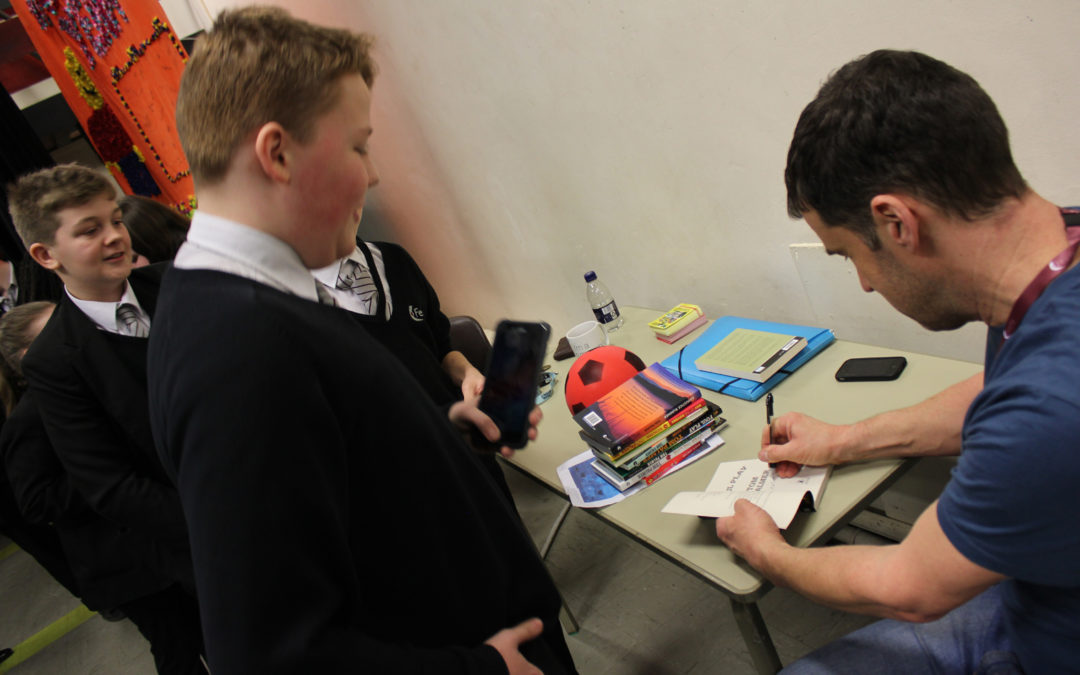 Children’s author Tom Palmer was welcomed to high schools across Rossendale thanks to a reading initiative led by The Valley’s Mrs Humphries, who was delighted when the prolific author accepted her invitation to visit the Academy.

Tom has written 58 books in total, with all but 10 being printed. At various high schools in Rossendale, he discussed his work and was delighted to answer the pupils’ questions and inspire budding authors.

At the Valley, he was asked why he wrote about dyslexia and he explained:

“I have struggled with reading and I know some people who are dyslexic and, although I am not myself, I know if I made a few changes to my books they would be accessible for everybody.”

Pupils at the school quizzed him about how long it took to write his novels and he explained if it was a subject he knew it took a couple of months to pen 20,000 words, but a book requiring research could take eight months.

He said:
“My favourite book is Wuthering Heights set on the moors not far from here and my first book I had published was Foul Play.

“The first book I wrote was Vigilante, about someone who witnesses people getting away with crimes and is not happy about it, so he punishes them himself. It has never been published.”

Tom described his publishing deal as ‘luck’ as he had a manuscript rejected 20 times before a friend suggested a fellow Leeds fan might publish his work – and he did.

He told The Valley pupils:
“If I was not an author, then I would be happy in the job I had before, working in the library trying to get more people to visit libraries.”

Tom explained how he can write for up to six hours a day. He also writes while he is commuting.

Harley Purcell, 13, was delighted to be able to buy a copy of ‘Armistice Runner’ and get it personally autographed.

He said:
“I like his books because they are something different, fun and unique. I also love reading history books.”

Librarian Kath said:
“Tom visited all seven high schools in Rossendale throughout the week and the feedback has been great. Our pupils had a fun, informative and inspiring afternoon with Tom and I hope it is an experience that they will always remember. The visit was made possible by the funding we received from the ‘We are Reading’ initiative and I know myself and my colleagues involved from other schools have enjoyed organising all our literary events throughout the year.”